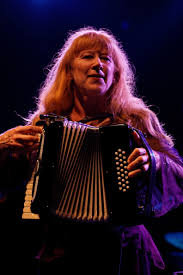 I’ve making up stories in my mind since childhood, though I seldom put them to paper. It wasn’t until high school that I really began to write seriously and regularly in my spare time. Nor was it until my sophomore year that I found a teacher who took that writing just as seriously. Enter Mrs. Lloyd, 10th grade English. Upon learning about my Auditory Processing Disorder, she gave me a very special gift: Reach For the Moon, a book of poems by Samantha Abeel. Like me, Abeel had a learning disability that severely hindered her in school, but she found solace and strength in the act of writing. Mrs. Lloyd later gave me another gift. I had once mentioned to her that I was growing increasingly fond of this New Age/Celtic artist from my Pure Moods CD collection. Imagine my delighted surprise when she gave me two of said artist’s CD’s to keep. Turns out she was a longtime fan! And so, Mrs. Lloyd, this one’s for you.

A lady born of Irish and Scottish descent in Morden, Manitoba, McKennitt originally studied veterinary medicine, but opted instead to become a musician upon discovering artists like Neil Young, Joni Mitchell, and Gordon Lightfoot. Her passion further blossomed when she traveled to Ireland to hear authentic Celtic music for herself. From there, she took up busking around Canada to pay for the recording of her first album. As of 2018, she has released ten studio albums and six live albums under her own label, Quinlan Road, and provided music for T.V. shows like Highlander: The Series (1992-98) and Legacy (1998-99), documentaries like Full Circle (Women and Spirituality) (1993), and movies like The Mists of Avalon (2001) and Tinker Bell (2008), just to name a few.

She’s received many Grammy nominations and Juno wins, as well as Billboard’s International Achievement Award in 1997, and even performed the Opening Ceremonies at the Vancouver 2010 Winter Olympics. But it’s not only her music that’s made her so distinguished. In 1998, she founded the Cook-Rees Memorial Fund For Water Search and Safety, following the tragic drowning of her fiancé, Ronald Rees, his brother Richard, and their close friend Gregory Cook, in a boating accident (hence McKennitt’s ‘98-‘06 hiatus). She donated all of the three million dollar profits from her then-latest album, Live in Paris and Toronto, to the fund. Moreover, on top of being an Honorary Doctor of many fields from various Canadian universities, she is also a member of the Orders of Canada and Manitoba; a recipient of Queen Elizabeth’s Golden and Diamond Jubilee Medals and the Canadian Forces Decoration; and a Knight of France’s Order of Arts and Letters.

I believe this love and respect for her fellow man and their stories is a driving force behind the noble grace of McKennitt’s songs. Besides her skill with the piano, harp, and accordion, her dramatic soprano vocals ebb and flow from soft and whispery to powerful and operatic, resulting in a voice filled with dignity and compassion. Her inspiration is firmly grounded in real-world history and culture, an authenticity which makes the quality of her music all the more majestic and haunting:

The ways in which McKennitt pays such tribute come in many lyrical and thematic forms. Her earlier albums are comprised almost entirely of covers of traditional Irish, Scottish, and English folk songs. Her mature yet spirited inflections make her sound as if she herself lived and breathed and sang during those ancient times, from “Blacksmith” a boisterous song belying a tale of love found and love spurned:

A blacksmith courted me
Nine months and better
He fairly won my heart
Wrote me a letter
With his hammer in his hand
He looked quite clever
And if I was with my love
I'd live forever.

To “The Wexford Carol,” as glorious and humbling as the Nativity it praises:

Good people all, this Christmas-time
Consider well and bear in mind
What our good God for us has done
In sending his beloved Son.

I’m particularly fond of her homages to the finest poets and writers in Western literature in the form of her setting their written pieces to music, partly because I’m always reminded of my British poetry and Romanticism courses in college whenever I hear them. Her rendition of “Stolen Child” by William Butler Yeats is filled with as much maternal warning as bedtime story fantasy:

Come away, O human child
To the waters and the wild
With a faery, hand in hand
For the world's more full of weeping
Than you can understand.

Alfred Tennyson’s “The Lady of Shalott” she treats with the slow, somber beauty of a funeral befitting the tragic life and death of its title maiden:

The Lady of Shalott

There she weaves by night and day
A magic web with colours gay,
She has heard a whisper say,
A curse is on her if she stay
To look down to Camelot.
She knows not what the curse may be,
And so she weaveth steadily,
And little other care hath she,
The Lady of Shalott.

And with sensual use of guitar and violin and the galloping beat of a dashing desperado, she fully captures the olden day intrigue and romance of Alfred Noyes’ “The Highwayman.”

He'd a French cocked hat on his forehead, a bunch of lace at his chin,
A coat of claret velvet, and breeches of brown doe-skin;
They fitted with never a wrinkle; his boots were up to the thigh!
And he rode with a jewelled twinkle,
His pistol butts a-twinkle,
His rapier hilt a-twinkle, under the jewelled sky.

In the mid 90’s and the early 2000’s, McKennitt began to broaden her geographical horizons, and her musical ones along with them. Her extensive travels and experiences through Spain, Morocco, Greece, and other Mediterranean countries add a fresh spice that compliments rather than clashes with her traditional Celtic sound. But more than that, they celebrate the countries’ respective cultures and the people who shaped their histories. I find this quality exceptionally strong in her instrumental pieces. For example, she plays for us the story of “Marco Polo,” the famed Venetian merchant whose explorations opened the eyes of Europe to the mysteries of Asia and beyond. And “Kecharitomene” (a Greek word meaning “full of Grace”) is the name of the convent in which Anna Comnena, an 11th century princess and writer who painstakingly chronicled the history of the Byzantine Empire, spent her final days.

But like all journeys, when one begins, another inevitably ends. In October 2019, McKennitt officially announced that she is stepping away from music production indefinitely in order to spend time with her family and to focus on efforts to fight global warming and to address the harmful effects of technology, even going so far as to quit Facebook the year before. I commend her for facing and discussing these serious issues, as we threaten to lose sight of our earth and each other with the world’s ever increasing reliance on technology. Whether or not we hear new songs from her in the future, I wish her the very, very best.

In the Jim Henson’s The Storyteller episode, “Hans My Hedgehog,” there is a line repeated throughout that describes the title character’s bagpipe music:

“It was a sound both bitter and sweet, beginning in hello and ending in goodbye.”

If there is a real-life musician that embodies this sentiment, it’s Loreena McKennitt. With her elegant singing she invites and greets with open arms; with her passionate playing she bids a fond and poignant farewell. Showing great respect for other musical styles outside her ancestral one, she creates a beautifully unique new-age sound all her own. But more importantly, she uses that very sound to preserve the legacies and honor the rights of all mankind whose emotions, desires, and questions are universally shared regardless of ethnicity and era. Every one of her songs is its own pilgrimage, as much a spiritual experience of humanity as a sonic excursion into antiquity.

Credits - All images, audio, and links belong to their respective owners; no copyright infringement is intended.

All other songs are by Loreena McKennitt:

Listen to the episode here!